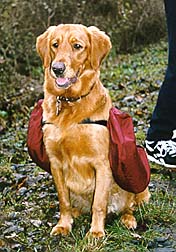 Blaze, owned by Jennifer Tucker, helps carry some gear with his burgundy Trekker dog pack. This picture was taken during a cycling trip on Kukopf Island (Rhine River), in Germany. The trip was about 12 kilometers with Blaze happily carrying his water, a Frisbee, and snacks for everyone! Jennifer sent us this nice message about Blaze’s pack:

“Blaze, our crazy ten month old male Golden Retreiver, has had his very snazzy Trekker dog pack for a couple of months now. It took a bit of getting used to. At first he looked at me like I was mad and refused to move. Somehow the pack seriously affected the use of Blazes legs even when being enticed by a biscuit! But then all of a sudden voila! He could walk again, all be it a little off balance but he managed 🙂

Now Blaze wonders what all the fuss was about. As soon as it’s on and I give him the all clear, he’s off – no stopping him! Well in just one afternoon Blaze managed to prove Wolf Packs correct. While he’s wearing it he can walk, run, sit, lay down and even ‘Oh boy there goes a squirrel, it’s running through the bushes, I don’t care come on let’s chase it!’ He gets even more attention from people when he wears his pack. We often hear comments like, “Look at the dog, he’s so cute!”

Thank you Wolf Packs for such a great product.