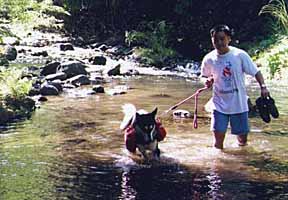 Neisha, owned by Gilbert & Sharlene Quintana, on a jungle tour of Subic (where the US bases used to be in the Philippines). Her Reflector dog pack held drinking water, the camera, and snacks. The name Neisha means ‘little princess’ (American Indian origin), which is fitting for this lovely Alaskan Malamute. We received the following message and the image above from Neisha’s owners:

Just thought you might want to see how great your Wolf Pack is doing here in the Philippines. We took Neisha on a jungle tour in Subic (where the US bases used to be here in the Philippines) and we had her carry our drinking water, camera, and snacks. In the attached picture, we forgot that the pack wasn’t waterproof, and it was too late when we discovered that the camera was still in there. Good thing someone else had a camera to take this priceless shot.