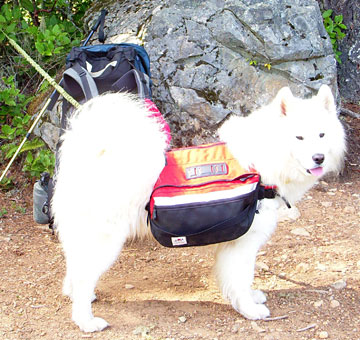 This handsome Samoyed is Tacoma. He is one of Lightning’s sons who lives in Washington. His owner, Kevin Silis, is training to climb Mount Rainier in June, 2009. Tacoma is a very lucky boy, as he gets to accompany Kevin on his training hikes.

Kevin took this picture of Tacoma on the Duckabush Trail in the Olympic Mountains (Hood Canal side). It was an eleven-mile trip. Tacoma was carrying eleven pounds in his Banzai dog pack, and Kevin’s pack held 52 pounds.