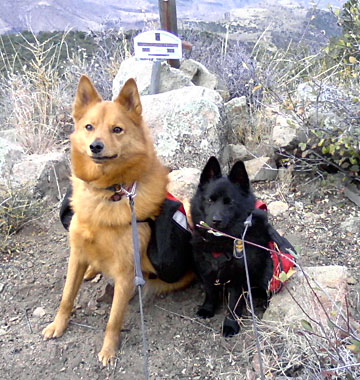 Here are Glen Fess’ dogs backpacking in the Sacramento Mountains of central New Mexico. Tapio, the Finnish Spitz, wears one of our Banzai dog packs. Fifteen pound Rowdy, the Schipperke, wears a dog pack from another company. Glen contacted us to check whether we make a pack small enough for the little guy, which we don’t unfortunately. This is what Glen had to say about his packs: 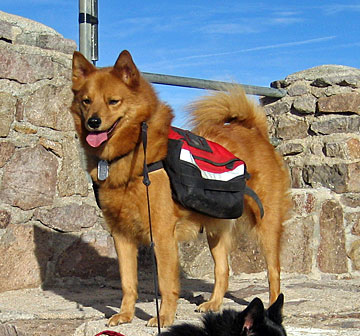 I currently have one of your Banzai packs for my Finnish Spitz (Tapio) and he luvs it!! I’ll be getting another in the near future for a Karelian Bear Dog that I hope to get in February, 2010. I also have a Schipperke (Rowdy) that carries a 2 piece Kelty K-9 Sherpa pack since he is too small for any of the Wolf Packs. The Banzai seems to ride much better than the Kelty pack and is much easier to put on and take off.